Posted by Terri on January 17, 2014
CurlyGirl absolutely loves snakes. That is no exadurarion. She literally hyperventilated in excitement and held her hands to the sides of her face like they do in the movies, when the snake guy let loose the first snake at his snake safety presentation. I think even HE was amused by her reaction. She desperately wanted to hold one, and with a little patience, she had her turn. 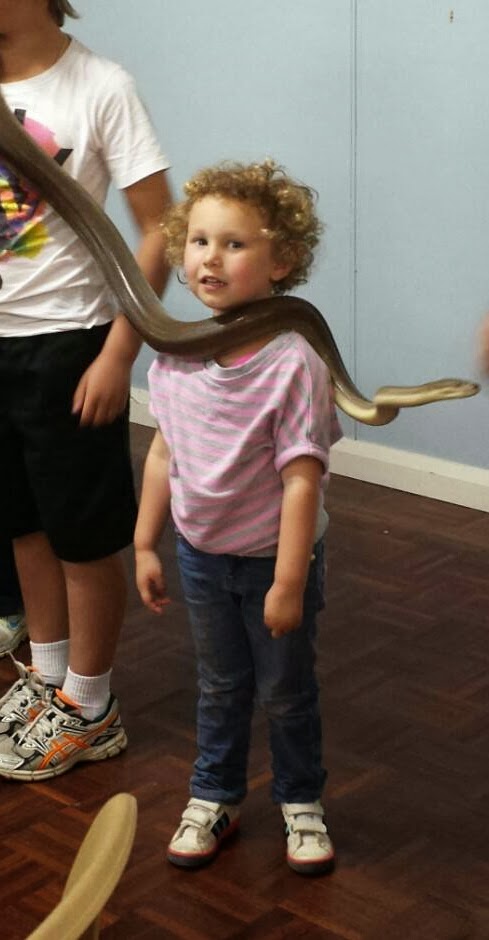 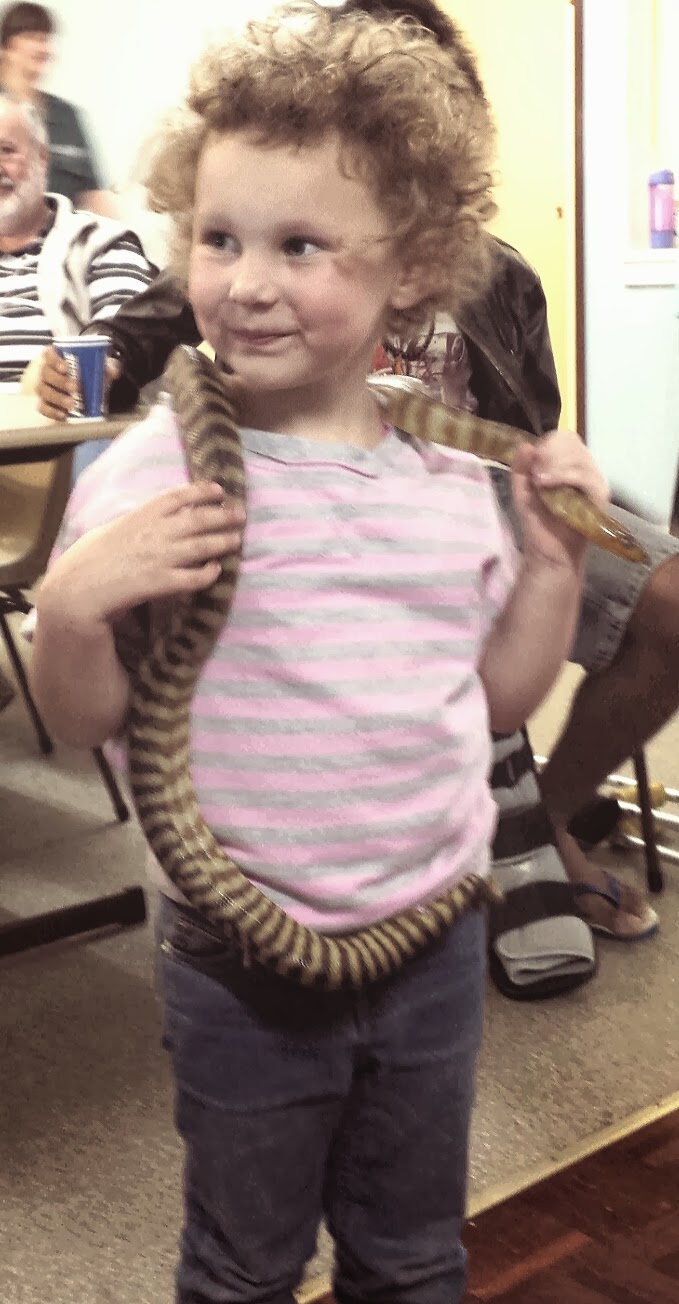 Then two weeks later something wonderful happened.
We were at a show/fair and the "snake man" was there. She spotted him from 10 meters away in a crowded alley. He had a massive python around his neck and greeted her kindly. I briefly reminded him that she was the snake obsessed kid a few weeks back, he smiled, and then he made her day. He got down on his knees and said "hello! Ive got something really special for you, put out your hands." Then  he reached into his pocket and pulled out a little snake and popped it into her hands. She held that thing like it was a newborn baby. She was SO happy! She also had one around her shoulders as he introduced her to this guy: 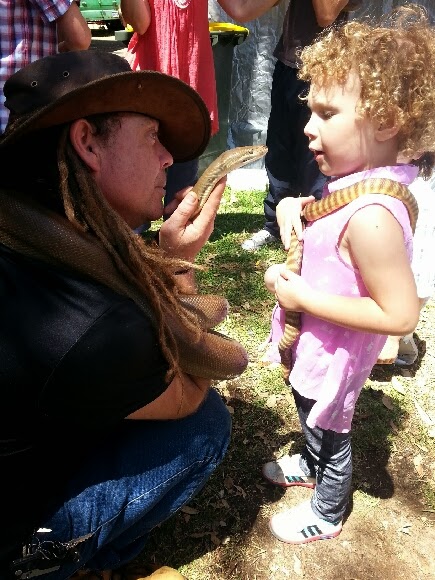 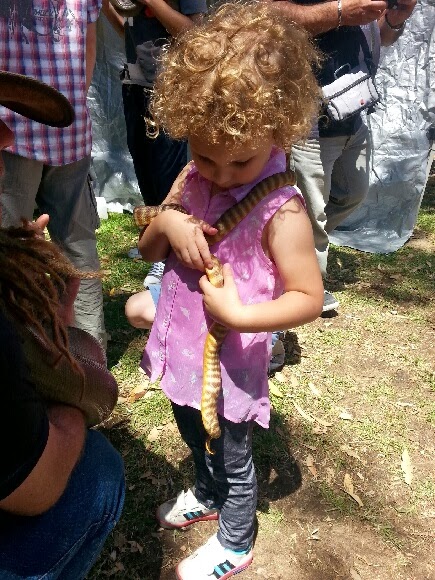 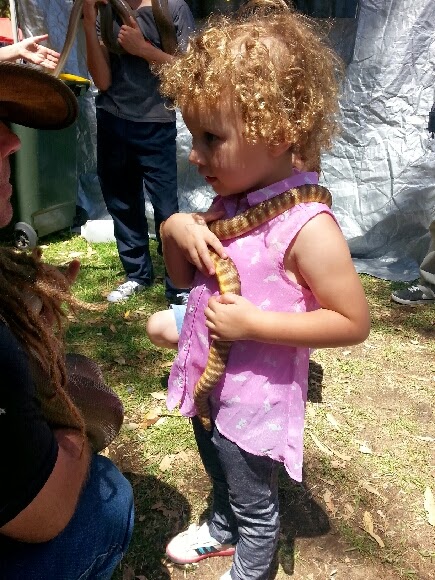 Happy is an understatement. She was beside herself!
Now before anyone gets all funny about us letting our child handle snakes lets keep some things in mind.
1:  Shes 4, not 1. She is capable of understanding that these snakes are different to the ones in the wild. She knows very well that she isnt to touch one in the wild or on our acreage and that she is to tell a grown up immediately.
2:  She isnt stupid. She is aware they are potentially dangerous animals and to use caution around them. Even with these tame ones she was very careful, slow and gentle.
3: we don't believe in fear mongering to keep our kids safe. Its not necessary. If we teach her to respect animals and to know which ones are safe and which ones might hurt her, she will be far better off than the child who sees her parents freak the heck out at the sight of a lizzard let alone a snake.
In fact people who are scared of snakes and carry on about how dangerous they are, are usually the ones who get themselves in trouble with them. They may see a snake and go into hysterics, scaring the life out of the snake who will then get its self defence on. Or they may go fetch a shovel or other weapon and try to kill the snake.
Attempts to kill snakes are the most common cause of snake bite... which makes perfect sense. Wheras a person who understands snakes, who respects them as potentially dangerous but knows what to do around them, they are the safest. Its simple. See a snake? Walk away. Or if its made its way inside call someone to remove it safely from your property. Dont tackle the thing yourself or go crazy. Simply leave it alone and itll slither off and keep on minding its own business. They only attack when threatened, so don't threaten them.
Teaching your child about snakes and how to be safe with snakes is a good thing. And the hands on approach is not for everyone thats for sure, but if your child likes snakes dont deprive your child of a memorable experience just because of your own fears. So, we are not "dangling a carrot" in front of our kids. We are teaching them to appreciate God's creatures and to respect them. Respect for animals doesnt stop at teaching them to pat a dog gently. It reaches to any animal they may come face to face with, and here in Australia, snakes are plentiful.
Now im not saying to let your 12 month old kid use a pet snake as a hula hoop so lets not get silly. My 18month old has not yet touched a tame snake and wont until he is old enough to understand these things im talking about. In fact I remember throwing out a rubber snake CurlyGirl recieved as a toy when she wasnt quite 2 yrs old as I didnt want it to be seen as a toy since one in the bush would have been no different at the time.
There are plenty of ways to teach a child about snake safety and to build a respect without fear of them. We have a few "bindi the jungle girl" dvds which our kids watch. Theyre great because when handling snakes they always remind the kids never to touch a snake In the wild. But they also see the beauty in these popularly fearsome creatures.
Weve also taken our kids to the snake talk in our local community which had a first aid presentation and then a snake handler talking about snake safety. I highly recommend attending your local snake talk even if it costs a small fee. Usually they run in the spring.
We also watched a few nature programs on snakes and have done snake crafts in the past. We also have googled pictures of snakes (make sure the child filter is on your search first!!). Another great way to discover snakes without the handling part is to visit a reptile park/museum. We have visited one down south a few times and it was excellent. Plus you get to safely see other reptiles in action like frilled necked lizards and crocs.
Snakes are just another fascinating part of creation and we need not give our kids a phobia over them. Keep it calm, keep it simple. Take a deep breath and let that snake handler drape a children's python over your lil ones shoulders haha. (Or perhaps for some, simply let them stand nose to glass in awe of these amazing creatures!)