What do YOU want to make today? Little one's love this question!

Posted by Terri on December 30, 2013
Usually, I set up crafts and projects for CurlyGirl to find and work with at her own pace and leisure. But sometimes I will ask her what she would like to make today and quite often it is something pleasantly surprising.
The other day she wanted to make a scarecrow. Just a small one to play with inside the house. Her mission was to find everything she needed. I explained that she would need two sticks or small poles, something to hold him up like a small box, clothes for the scarecrow, and something for his face. She went around the house and found most of it herself I supplied the sticks. Then when it toppled over from its weight I asked her what we could place inside the box to keep it upright. She said it needed to be something heavy. She then went outside and came back with some small heavy stones. Her idea worked and she was happy about that.
She used a plastic cup for a face, a cowboy hat from the dress up box, one of her own shirts (because the one she pulled out of the laundry basket was too big haha) and drew on the facial features... which isn't visible in the photo but it is there. She used an empty dishwashing tablet box she found in the recycling as a base.
We had fun putting it together... here he is, haha cute and simple and so creative.
Remember to ask "what would YOU like to make today? " 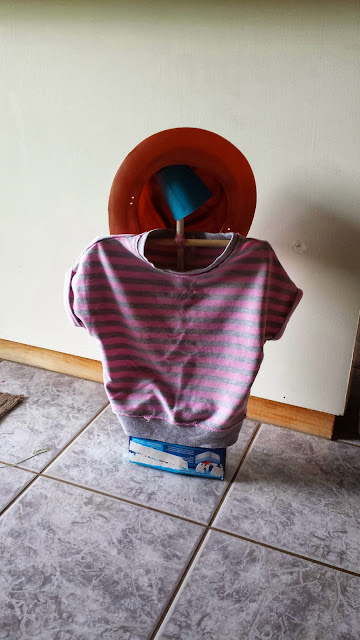