Finding the right scissors for a young child (toddler to Kindy)

Scissors. They caused us some serious drama last year during kindy, and I didnt realise the reason was not hand-eye coordination or anything of the sort, but that the quality of so many different children's safety scissors are seriously poor! No wonder my child was getting so frustrated! We started off with the typical, widely available crayola scissors, usually found in green but here is a red pair: 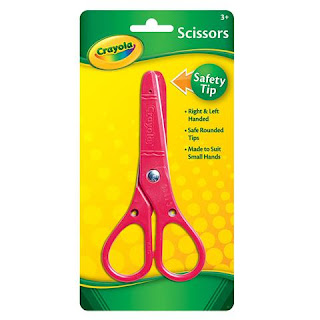 one day i picked up Curly girls scissors and went to cut something....and it wouldnt cut!!! Only if I had it on the EXACT correct angle would it cut! Whaaat????!! Righto... So then I grabbed the plastic see through pink scissors we had purchased from kmart... tried them out, same problem but worse. The paper just bent for me exactly like it did for curly girl. Worse than the crayola. I went through three other pairs I had bought in attempt to help out my daughter with her cutting skills, to find that the "safer" these kids scissors were, the less effective they were at actual cutting and the more precise you had to be with the angle you used.

We have been through several pairs of scissors...

See the three types of "blades"? One is non safety, and of course cuts best but can cause mini heart attacks while you supervise your child whom you think will cut their fingers off any second... the other has no blade at all is just completely plastic, so super duper safe and super duper useless, the last is the classic type, plastic, rounded edges but a blunt small sort of blade..that requires particular paper to scissor angle to work. 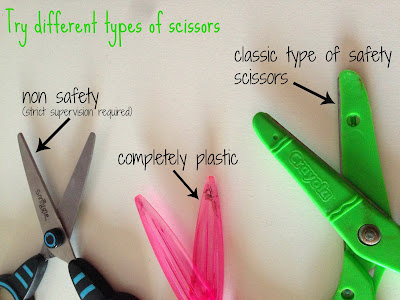 Finally after much trialing, we decided on our favourites, that actually work... both are the same brand and both are not expensive, and both I have found at Big W and also officeworks so far:

First, these Kidi Cut Maped scissors for 2+ yr olds. Finally! A completely plastic pair of scissors, that are nice and small (perfect size for the age) and still cut great as long as your child's hand is in the right place for cutting (awkward positions dont work, which is good as it encourages proper use of the scissors and stops little hands from aching). These are really great, curly boy is able to cut with them very well. He started using them at 2.5yrs and got the hang of them within a few minutes. I feel confident letting him use them without him chopping his fingers off too. HIGHLY recommended. 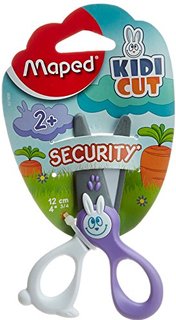 The next pair are also maped, and look like the ones below (both come in different colours) these ones are not safety scissors, as you can see. But they are still a great size for about a 4+ yr old. They cut really well but require very close supervision, I like them because of the way the fingers sit in the holes, they seem to help, plus, see that little green thingo? Its like a switch, if your child is having trouble opening and closing the scissors, you flip that switch, and when the child clamps down to cut, it automatically pushes it back open for them, so they can get the hang of cutting action without worrying about not being able to open and close the scissors smoothly. Once they get the hang of the cutting motion and build confidence/hand muscle, you can turn the mechanism off and they can chop away all by themselves. Curly girl had trouble using scissors last yr in kindy, and this pair fixed that problem. 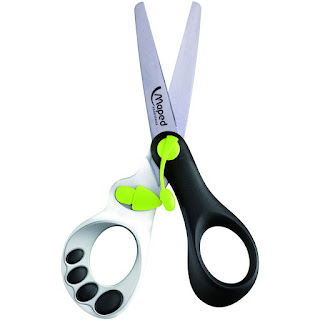 So although you can try lots of different paper cutting activities, crafts, exercises to help your little ones learn to cut with scissors, and it will be good for them to practice, be sure to go and test out your child's pair of safety scissors to see if perhaps they are the root of the problem! As soon as we found scissors that actually worked, It solved 90% of curly girls scissor woes!

Hope this has been helpful, happy snipping!