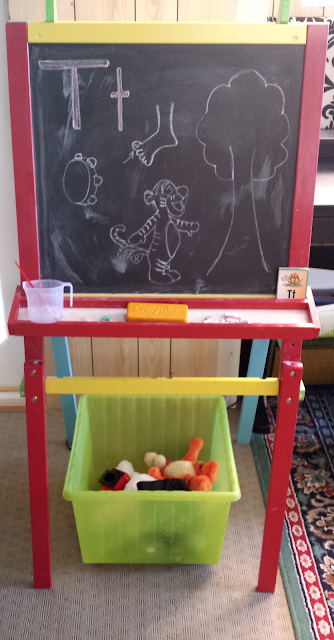 I thought I'd share one of the things I did with CurlyGirl during the year when she was 3-4. (pre-kindy). She showed a keen interest In learning the letters of the alphabet, she already knew her ABC's and could Identify some letters, but she wanted to know them all. We set up her blackboard which she rarely used and was wasting space,into a little blackboard Ietter of the week zone.
I would draw up in the corner the chosen letter, then have simple drawings of things beginning with that letter. The green box underneath is for items starting with that letter, and I also used a tiny set of books that came in an alphabet train tin for her to look at (its perched up there on the right).
It started out with myself filling the green bin and CurlyGirl telling me what each one was called while I reinforced that they all start with that same letter. Then I started to leave it empty and she would go around the house filling it herself with things that start with that letter. And we would go through and make sure it was all meant to be there.
we also started out with CurlyGirl colouring in the pictures with coloured chalk. But she ended up prefering to "paint" the pictures with water and a thin paintbrush.
after a little while of doing this we added to it, so that she would go to the other side of the blackboard (there is a whiteboard on the other side) and from memory she would draw the letter herself. Some days she would need some help and I would draw the letter for her to copy. Other days she would do very well all on her own.
This has been a nice and simple way to introduce the alphabet and she can explore it and do the activities at her own pace each week. It has been quite effective. We also read lots and lots of books together and this is just one of a number of learning opportunities we set out for her. She is now 4 and uses the leapfrog leap pad explorer amongst other things.
------------------
Where did you get it?
Blackboard: Kmart (was a gift so I dont know price)
Alphabet bus: was purchased second-hand
Green bucket: is VESSLA from Ikea, has wheels