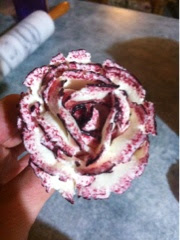 Well Im definately on a baking stint at the moment. Or at least a cake decorating stint of sorts. After my recent fondant experiment I was inspired to keep trying... and also to take a step back and work on buttercream experiments seeing as the general consensus is that buttercream decorating is alot easier.

Mother's day is coming up and I wanted to make something special for my mother in law and grandmother who is like a mum to me. Cupcake bouquets are just gorgeous, and I believe, within my ability......... but I needed to put this to the test. I decided to practice a few flowers this evening after watching a few youtube tutorials. It looks so easy! But from experience I've learned that it could look easy as 1-2-3 because the demonstrator is rather gifted or experienced, but in reality a task can be about as easy and jamming a square brick into a circular hole.

Therefore I approached the experiment with caution. I made up a batch of my latest buttercream recipe and decided on trying out a two-tone rose using wilton tip #104, which is a petal tip, and another type of rose, a simpler one used on cupcakes which requires the wilton tip 1M (or equivalent).

I used the two-tone method that requires you to use a skewer or straw, to "paint" a strip of food coloring (gel form) down one part of the piping bag before filling it with your icing. This worked very well. I used a pink, which turned out a beautiful deep pink...almost red in places. I left the buttercream its natural white.

I had to take a trip to spotlight this week to pick up the tips and a flower nail. I was behaved and only purchased exactly what I needed for this particular experiment as I have a tendancy to go overboard and get more than I need with good intentions to use it all in the future. But my sanguine self is somehow being tamed to take it slower and its good, it keeps me frugal. Anyways,

the flower using the 104 tip turned out lovely. The pictures dont even look as nice as the real thing did. My husband was chatting to me whilst I stood in the kitchen with the flower nail and piping bag. He curiously asked me "what are you doing?!" When he saw the colour being scraped into the plastic bag. "Im trying something out" I said. He continued what he was saying to me, whilst I began to test out my first flower. I finished it quite quickly and was so chuffed at the result I rudely cut him off mid sentence, held it up to his face, twirled it around and said "what do you think?"...
He took a look at it... forgot what he was talking about and immediately responded "That's amazing!!! It looks so real, it looks like a real flower!" I promptly apologised to him for cutting him off, he smiled and kept talking, but kept saying "that thing looks real" until I let him eat it. I went on to make another three just because I could :-) it was so much fun and SO EASY!!

Next...1M tip, a "simple" cupcake rose. Not so simple. I think I will definately have to go back to the tutorial again because Ive obviously forgotton something. It just looked like messy swirls on a plate. It wasnt rose-like in the slightest. More like an 8 yr olds attempt at jazzing up a cupcake with a star tip lol. Thats okay, ive aced the supposedly harder one so Im positive I can get this one right next time. *update - tried again, was extremely easy, was just holding the tip wrong!*

Only thing I found Is that my icing seems to look a little...torn on the edges? Which worked wonderfully for the type of flower i was doing, it added to the realness of it all with that delicate somewhat jagged edging. But I dont see it working with the cupcake rose pattern so I must figure out why it went this way. Could be the amount of pressure applied when squeezing it out, might need to squeeze harder...or maybe im moving the tip too fast, or I have the wrong consistency of icing. Whichever it is, I have time to get it right. Im just glad It was a general success! *update - it was that my icing was too thick. I added a tablespoon of milk and it fixed the problem*

So I will be making the cupcake bouquets for mothers day and will post the results for you for sure. I also plan to try my hand at cake-pops. I may do this also for mothers day for my SIL's, or I may save it for another occasion, but its on the cards and Im excited about it. Im really enjoying this at the moment. It's funny. Id never actually EAT these things...i dont like sweets... at all. One lick of icing is enough to put me off the rest of the cake. Im a savory girl! But I love creating sugary treats for others as it puts a smile on peoples faces and allows me to be creative as well as giving at the same time!

Im keeping a couple of the roses on a plate to see how long they last before loosing shape, or tasting different. Im guessing u could get away with 3 days unrefrigerated because of the amount of sugar and shortening in them. We will see. They went nice and stiff after just 15 mins so theyll definately keep their shape for a while. 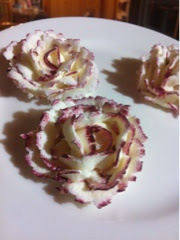 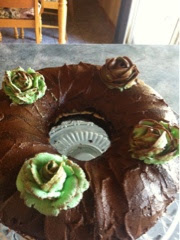 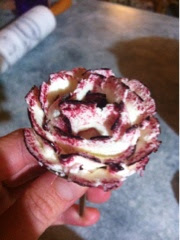 and here is a link to the tutorial that I found most useful out of all the ones I watched:
How to pipe a rose with frosting